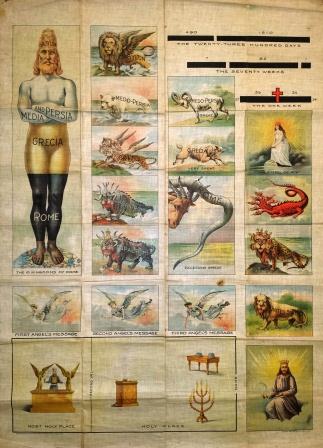 Last week, the Heritage Research Center was privileged to receive one of the prophetic charts created and produced by William Ward Simpson in the late 1890s or early 1900s. The chart was donated to Loma Linda University by Bruce McClay, a librarian with the Walla Walla University School of Nursing in Portland, Oregon.

William Ward Simpson was born on August 1, 1872 in Brooklyn, NY. One of six children of William Ward Simpson Sr. and Anne Turner, William was the only one to survive early childhood. William converted to the Seventh-day Adventist faith in 1890. As a youth, William had worked at the Battle Creek Sanitarium and in the office of the Good Health publication. He completed an apprenticeship in the Review and Herald office in Battle Creek, where he was working at the time of his conversion. Not long after he informed the foreman of the press that he was going to quit his job so that he could spend his time preaching the Third Angel’s message. William married Nellie F. Ballenger on May 10, 1899 and was ordained as a minister on June 17 of that same year. Simpson spent the next eight years preaching to enthusiastic crowds throughout California and the Midwest using the large, colorful chart he produced to illustrate the Biblical prophecies in the Book of Daniel. Simpson also had large papier mache’ beasts made to resemble the beasts as described in the Book of Daniel and to be used in his evangelistic meetings which attracted crowds as large as 2,000 in Los Angeles in 1906. These beasts were given to Andrews University, where they reside in the Center for Adventist Research.