Tell us what THINGS you want to check out at the library. Please take our Library of Things Survey.

The Heritage Research Center is pleased to announce the opening of Quack ‘o’ Rama: A Collection of Questionable Medical Devices, a solo exhibition of quackery devices collected by the late LLU professor, William T. Jarvis, Ph.D. Selected items are now on display in the lobby of the Heritage Research Center located within the Vernier Radcliffe wing of the Del E. Webb Memorial Library, across the breezeway from Magan Hall.

It is shocking to believe that anyone would take these medical devices seriously. In decades past, a combination of scientific ignorance and hope for a magical cure-all allowed quack gadgets to thrive. In these modern times, a look at late-night infomercials on television shows medical quackery is still going strong. Consumers can even find quack gadgets on the “As seen on TV” shelves of their favorite retail chain stores. Quack ‘o’ Rama exhibits a selection of both handheld and large, cumbersome devices developed during the 1910 – 1950s used to fool and rob the consumer. Items on display include, the Radium Ore Revigator, a ceramic water crock lined with radioactive materials. This was marketed as a simple means to prevent illnesses including arthritis, flatulence, and senility. Also on display is the Ultra Violet Ray device which claimed to treat acne, alcohol and drug abuse, arthritis and cancer. Other items include antique medicine bottles, a sunlamp from the Battle Creek Sanitarium, rare first editions and out of print books from Loma Linda University’s own Department of Archives and Special Collections, and vintage snake oil posters. 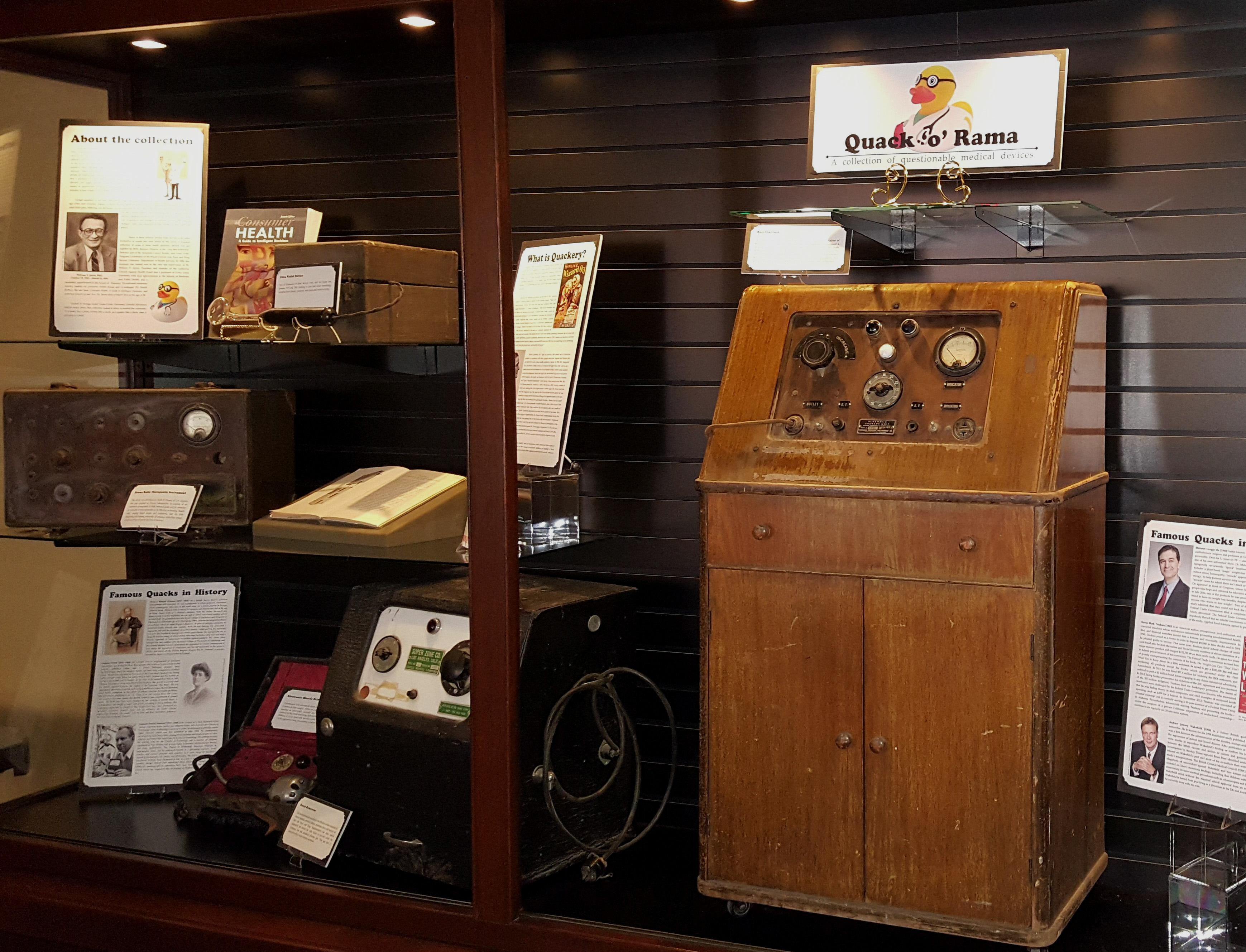 The exhibition is currently on display in the lobby of the Heritage Research Center located within the Vernier Radcliffe wing of the Del E. Webb Memorial Library

Many of these medical devices were proven to be either ineffective or unsafe and seized by the courts. Some of the inventors of these gadgets faced criminal charges too. During the 1980s, the equipment on display was turned over to the care and supervision of Dr. William T. Jarvis, President and founder of the California Council Against Health Fraud. Jarvis was also a professor at Loma Linda University with dual appointments in the Schools of Medicine and Public Health, and a secondary appointment in the School of Dentistry. He authored numerous articles, mainly on consumer health fraud. He also co-authored The Health Robbers, the textbook Consumer Health: A Guide to Intelligent Decisions, and authored Quackery and You. Dr. Jarvis died in March 2016 at the age of 80.

Those who wish to view the exhibit may do so for free! The items will be on display at the Heritage Research Center located within the Del E. Webb Memorial Library at the Loma Linda University campus from May 01 – September 29, 2017 during normal library hours.