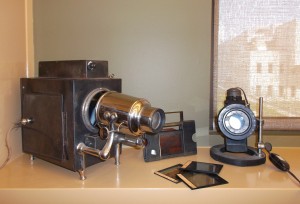 Have you ever heard of a Magic Lantern? The magic lantern is the forerunner of the modern slide projector. The first magic lantern was developed in the 17th century. The ones pictured here are early 20th century. There has been some debate about who the original inventor of the magic lantern is. The magic lantern has a bowl-shaped mirror in front of a light source that gathers light and projects it through a glass slide with an image scanned onto it. The light rays cross an “aperture” (which is an opening at the front of the apparatus), and hit a lens. The lens throws an enlarged picture of the original image from the slide onto a screen. The Department of Archives and Special Collections has a glass slide projector and more than 30,000 glass slides used by early Adventist evangelists in addition to those used by early Loma Linda University faculty.  After the closure of the American Medical Missionary College in 1910, the Loma Linda board decided to purchase the medial slides from Battle Creek Sanitarium and add them to the existing collection. 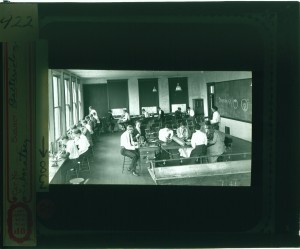 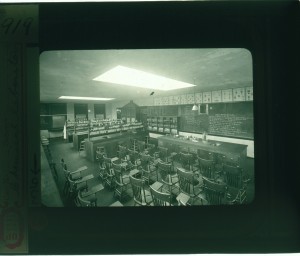