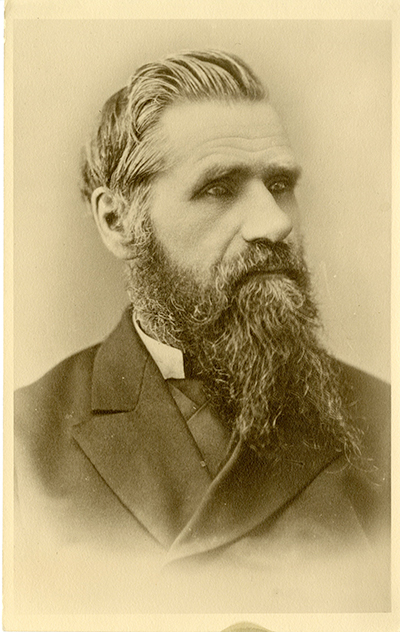 For more than 100 years, the Seventh-day Adventist Church has been conducting camp meetings. These formal meetings, held annually, are spiritual renewal gatherings for members of the church and their guests. The conference in each division plans a ten-day or weekend camp meeting filled with seminars and sermons that teach biblical principles, healthier lifestyles by practical living principles and more.

Planning a camp meeting has never been an easy task for those involved, and the 1876 camp meeting in Groveland, Massachusetts would be no exception. The camp site was located in a grove of oak and pines trees. Train tracks from the Boston and Maine railroad ran along one side of the grove. There was also a river nearby with the possibility of bringing visitors to the meeting. Elder Stephen N. Haskell [1833 – 1922] did not see transportation as a problem, but as an opportunity for the railroad to be hospitable to the General Conference of Seventh-day Adventist.

As time grew near, Elder Haskell made a list of special favors, which included free fare to and from the camp meeting. He hoped to get the railroad company to do these favors for the benefit of the meeting. Accompanying Haskell was minister, Asa T. Robinson [1850 - 1949]. The two men went to go see Mr. Ferber, president of the railroad company.

The list was given to Mr. Ferber and he later took it to his manager. “Gentleman, why don’t you ask for the world?” said the manager when he met with Haskell and Robinson. Joking Haskell responded, “Oh, we thought we would be a little modest.” At the end of the meeting the two men were granted use of the railroads during the conference. Shown below is the ticket that granted free return trip passage on the Boston and Maine R.R., signed by S. N. Haskell. 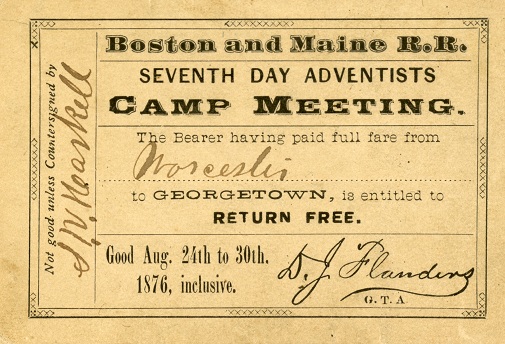 Attendees to the 1876 Groveland camp meeting were granted free passage by trains.

Ellen G. White made an appearance at the Groveland camp meeting on Sunday morning of August 27, 1876. She spoke on the subject of Christian temperance to the 20,000 in attendance. Eighteen trains ran each day, and each train was packed with camp attendees. The platform and steps were so full that the conductor had to climb on the roof in order to signal the engineer. The conductor reported that it would have taken twenty-five railroad cars to carry all the people who were waiting for a ride at the depot to the campground.